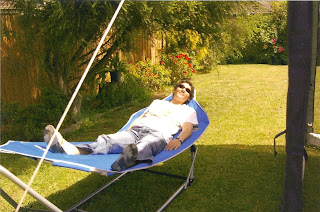 Garth relaxing at home 1 January 2009. By the time you read this Garth will be back behind the rabbit fence at Thomas Embling Forensicare... Garths parents want him home. Garth wants to stay home...the psychiatrists have other ideas. Is this the beginning of a new wave of another stolen generation?

Garth was allowed out from behind the rabbit fence at Thomas Embling Forensicare Institute from 8:00am to 8:00pm on 25 December 2008 and 1 January 2009.

Why does Garth have to go back to the Thomas Embling Forensicare Institute you may well ask? If Garth did not return he would have been returned by force by the outstrecthed whims of the psychiatrists. Incidently, just a reminder Garth is actually in a forensicare hospital(sic) a prison and he has committed no crime. Garth is not detained under the Crimes Act 1997, the Crimes Act 1914 of the Commonwealth Section 20BJ(1) or 20BM nor is Garth under the Sentencing Act 1991 neither is Garth Daniels a security patient subject to mandatory clinical trials or research. Garth is there simply because psychiatrist at the Alfred, Maroondah and Austin Hospitals decided upon it. The big question is WHY?

Why after being injected probably more times than an actual lab rat, locked in isolation for weeks, shocked, forced medicated and treated by more than 220 psychiatrists over a period of ten years in the Victoria Public Mental Health System... Why will they not release Garth Daniels? Garth Daniels is not a raving lunatic. All Garth Daniels wants is to go home. What is the real reason for the psychiatrists at Maroondah supported by others within the Victoria Public Mental Health System wanting to keep Garth Daniels an involuntary patient?

Garth is detained as an involuntary patient under Section 12 of The Mental Health Act(MHA) 1986. Garth has a right under Section 18 of the MHA to obtain a second opinion outside the public health system. This to date has been denied. Garth also has a right under Section 19A of the MHA to seek alternative treatment options. Despite the fact Garth has not refused oral medication the treating psychiatrist Dr. Kevin Ong and Dr. Douglas Bell have elected to give Garth intra-muscular injections. This type of forced intrusive treatment is generally reserved for non-compliant patients,of which Zulcopenthixol in particular is reserved for acute psychosis.

Garths treating psychiatrists appear not to give much attention to the Manufacturers Prescription Guidelines either. This is of course a concern as it appears clinical trials on which the PharMa spend millions of dollars to have their drugs approved is of little relevence in the real ward of psychiatry.

For the record...Garth is not acutely psychotic...Garth had at this time of writing spent 25 December 2008 and 1 Janaury 2009 at home with his parents Bernard and Marilyn. There were no security guards, locked doors or anything of the sort...just a happy reunited family who reluctantly had to take Garth back to the Thomas Embling Forensicare Institute(sic)a prison hospital;simply because the stroke of a psychiatrist pen dictated it.

Garth is being visited on a daily basis by family members and his continued detention is disturbing to those who have been given absolutely no reason for such continued incarceration. Except of course that Dr.Kevin Ong and Dr.Douglas Bell against the wishes of Garth and that of his dad who holds Power of Attorney Medical(Enduring)for Garth, advise that they wish to trial the imi zuclopenthixol with Garth and not loose him to the private sector because they will lose the follow-up.(sic).

Professor Mark Oakley Brown, Deputy Chief Psychiatrist has written to Mr. Daniels (senior) and stated that he should speak to the treating psychiatrists. The treating psychiatrist Dr. Kevin Ong advised he will be speaking to the Director of Eastern Health. Meanwhile,Dr. Douglas Bell, Deputy Director Clinical Services at Thomas Embling who initiated this treatment of Garth has gone on leave to April 2009.

Bernard and Marilyn Daniels want nothing more than their son Garth FREE!...
Posted by FREE GARTH at 4:19 PM No comments: