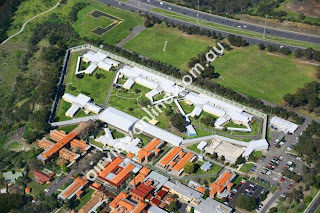 Garth Daniels after again being kept in seclusion for thirty days from August 2009 was transferred out of seclusion at Peninsula Health in September, into an environment which houses inmates of the Criminal Justice System. The irony of the situation is that to be freed from seclusion (solitary confinement) Garth Daniels has virtually been sent to prison.

The Thomas Embling Hospital located in Fairfield, about 7km from the CBD of the City of Melbourne, Australia...as the photograph shows, resembles more of a prison detention centre than a hospital. In fact it must be assumed that it was designed as a purpose built facility for inmates from the Criminal Justice System. Does it look like a hospital to you?

There are NO EMERGENCY facilties at this site, no specialists doctors, except psychiatrists whose treatment is dependent soley upon the administration of mind altering drugs. These drugs given either orally or by intra-muscular injection, as is the case with Garth Daniels.

Persons detained here under Section 47 Corrections Act 1986 provides the right to have access to reasonable medical care with the approval of the PMO (Prison Medical Officer) at their own expense and with a MO (Medical Officer) of their choice.

Garth Daniels is NOT at Thomas Embling as an inmate from the Criminal Justice System and is not detained under The Crimes Act, The Sentencing Act or The Corrections Act...Garth Daniels is there because he is being treated under an ITO (Involuntary Treatment Order)...despite the fact that it had been acknowledged in the legal sense, that Garth is capable of consenting to appropriate treatment. This being the case Garth Daniels should be discharged from involuntary treatment but continues to be treated without his informed consent.

An Ethics Committee governs the research activities at this Hospital;which as the photograph is within the perimeter of a ten metre high fence(silver grey buildings)
Posted by FREE GARTH at 2:29 AM 1 comment: