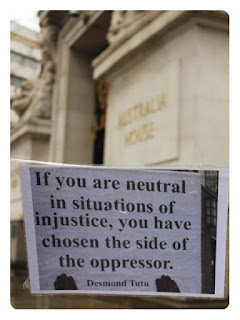 "In Garth's case the medical response has been a demonstration of the demonization of mental health with the convenience of the combination of criminality, allowing an implantation of the ILLEGALITY of incarceration and an effectively suborned institutionalization in the place of properly structured and informed health parameters in what ought to be medically driven intelligence and scientifically validated evidence based practices of health and social historical initiatives".

This statement is in the context of the awareness that the penal system - by which Garth Daniels has been impugned - is the relic of slavery and the whole auxiliary health and education systems are aligned to this political agenda. Full stop!

On 23 May 2016 at 11:51 COPY EMAIL from anthony.cidoni@monashhealth.org a viral transmission...Quote:-
"Dear all,
You may be already aware that Garth Daniels was not returned from family leave last Thursday night.  We are extremely concerned at the risk of deterioration in mental state and potential for serious violence.  Any assistance you can provide in locating him and safely returning him to our care would be greatly appreciated.
Regards,
Anthony Cidoni


Six months earlier 22 December 2015 Garth Daniels was reviewed while in four point restraint at Upton House Psychiatric Department of Box Hill Hospital by medical doctors from the main wing of the hospital. They informed Garth he was to be transferred that morning to the Emergency Department.


By 3:00pm Garth was transferred from the Emergency Department to ward located on level 6.1 of the main hospital.  Garth recalls that he had had an MRI full body scan and that he had been informed "they" suspected an appendix or  UTI or some infection and that he had a very rapid heart rate.

What was the  real reason for the transfer ?  Is it the result perhaps of an uncontrolled seizure during the administration of ElectroShock ?  Did they deliberately withhold a muscle relaxant to establish effect?  What of the unexplained bruise on Garths forearm ?

Perhaps too many questions were being asked by the family of the psychiatrists'?  The media too had started to take an interest including ABC TV Australia.  Garth's case was highlighted at an International Conference of the Council for Evidence based Psychiatry (CEP-U.K.) held at the University of Roehampton in London on 18 September 2015.  Professor Peter Gotzsche Director of the Cochrane Collaboration in Copenhagen highlighted the case of Garth Daniels at the conference.

Protests against the treatment of Garth Daniels were held simultaneously in Melbourne and London in front of Australia House.  An independent Senator raised the plight of Garth Daniels in question time in the State Parliament of Victoria.  Social media had sprung into action.


Change.Org labelled the awareness campaign as The Killing of Garth Daniels, Facebook campaign with a Free Garth heading appeared with  individual postings.  It appeared the Grass Roots had finally began to awaken in a show of solidarity.  It appeared the psychiatrists in charge of Garths treatment were intent on continuing to electroshock Garth until he consented to  clozapine  treatment.  Mad In America website started receiving and publishing the submissions by foreign correspondents on the plight of Garth Daniels. Another Australian traversed the Nullaboor from Freemantle to Melbourne to attend Court hearings in support of Garth Daniels. In fact this particular Australian made her mission absolutely clear.

Daniels senior had sought to stop this continuous assault on their son by seeking injunctions in the Magistrates Court some months earlier, only to be told that he was in the wrong jurisdiction and find $12,000-00.  Daniels senior having self represented appealed to the Supreme Court where before Judge Ginnane the case was effectively argued to the extent the barrister for Eastern Health agreed by consent to cease seeking costs.  Judge Ginnane dismissed the fine and the case adjourned by consent.
During this period the Electroshocks continued and it was at this time the ABC TV aired its program.

This provided the opportunity to concentrate upon the immediate and continuing ElectroShock upon Garth.  Who at this stage had assigned a lawyer to his case.  An application was made to stop the ElectroShock and make application for  Habeas Corpus.  The case occupied three days in the Supreme Court of Victoria at Melbourne Australia before Justice MacDonald.  Garth who is alleged by his treating psychiatrists as  being the most violent patient sat quietly unrestrained in the Supreme Court for three days.  Garth even ventured outside the Court during recess without restraints... and unaccompanied by hospital security staff. 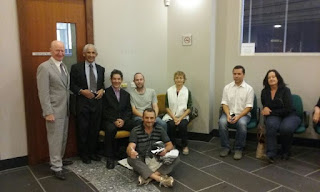 Excerpts of the transcript and Garth Daniels address to the Court see References.

Two weeks earlier Daniels senior had lodged a Statutory Declaration of Liability with all the known psychiatrists who had participated or been involved in the Electroshock of Garth Daniels at Upton House, Box Hill Hospital.  It would appear that as a result of the lodgment of that document left for the attention of those psychiatrists there was a sudden transfer of Garth Daniels to Dandenong Hospital Monash Health.

A day before the VCAT Hearing a Mental Health Tribunal Hearing was called for by Dr. Anthony Cidoni.  The result of course was not unexpected.  The Tribunal acceded to the request and authorized a further twelve shocks to be administered to Garth Daniels.

Appearing at VCAT and confronted with deliberations that lasted from approximately 10:00am to roughly 3:00pm... the Victorian Administrative and Civil Tribunal by consent with Dr.Cidoni, the Office of the Public Advocate and Daniels senior agreed that neither Monash Health, Eastern Health's A/Professor Paul Katz had any further interest in removing Daniels senior powers of attorneys or Guardianship.    Daniels senior had successfully demonstrated that his primary and only interest was and is the wellbeing of their son Garth Daniels.

The pervious week Garth Daniels had for a brief period gone AWOL by extending his lunch break off-campus by a few hours.  What Garth Daniels had done was to consult with the Prothonatory at the Supreme Court of Victoria at Melbourne and lodge an application against his incarceration and also provide the documentary evidence that the hospitals were acting in contravention of the Covenant of Civil and Politics Rights as  endorsed by the Australian Government. A hearing was scheduled for the next day in the Supreme Court before Justice Keogh.  The staff at Dandenong Hospital were notified but the next morning refused Garth his right to attend his own court hearing.  VCAT Hearing was held a week later.. a day after the MHT hearing.

Dr. Anthony Cidoni comments of course cannot be commented upon other than it had appeared Dr. Anthony Cidoni was rather smug on leaving the VCAT in all probability assuming that Garth Daniels was quietly awaiting his return to be shocked yet again.

That evening 19 May 2016 during the late hours of the night Police arrived at the Daniels senior  residence banging on the front door which was opened by Daniels senior. It was definitely the Police who demanded to know as quoted by Daniels senior " What's going on here and where is your son Garth?" unquote.  They proceeded to search the house...