What have been the benefits to date for Garth Daniels?  He has spent fifty-seven straight days in isolation/seclusion... thats approximately 1300 hours.   Brutally bashed on 24 April 2012 culminating in a fractured cheek/jaw bone and again bashed in the same manner on 17 May 2012 with no follow-up on the potential injuries that may have been sustained including the fractured jaw/cheek bone.
﻿
ACTUAL PHOTOGRAPHS OF GARTH
25 April 2012 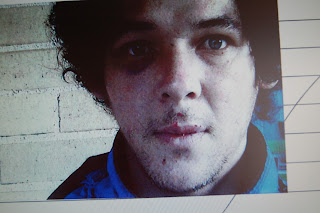 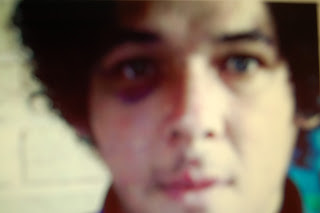 Blurred vision, sore eyes, oculogyric movements of the eyes, tardive dykensia, memory impairment - ADR's - adverse drug reactions perhaps?  Apparently non exsistant according to his minders at Thomas Embling.
17 May 2012 insults sustained to the same facial region..not once ..but twice.. despite assurances that appropriate action had been taken to ensure that it would not happen again.  BUT, it did happen again and again and again. 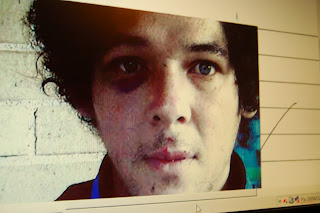 Incarcerated within the confines of a three meter high wire cage in excess of seventeen months and counting. MAD-Mind Altering Drugs﻿ prescribed in excess of the manufacturers recommended safe dosage without consent.  Locked in isolation for fifty-seven days roughly 1300 hours for necessary treatment(sic). Brutally assaulted by inmates and left with a fractured jaw/cheek bone ( Zygomatic Arch) confirmed by CT Scan... but not permitted surgery or alternative opinion of choice of physician.  Yet this priviledge is extended to those incarcerated at Thomas Embling by the Courts.

Treatment contrary to second opinion/s obtained.  Tablets crushed before being administered with no cognizance of rate of metabolism culminating in probable toxicity.   ADR's - Adverse Drug Reactions reported by Garth to the "treating team" . blurry vision, sore eyes, sore throat, oculogyric movements of the eyes, memory impairment... disregarded as if its' none exsistant.   Once again insomnia appears to be entering the equation... a paradox perhaps of the over prescription of Zyprexa ?

"Treating Team" refuses to discuss any issues about Garth with the parents who are in turn directed to speak to the ever elusive psychiatrists...  Dr. Hemlata Ranga the treating psychiatrist still refuses to speak to the parents... and continues with her prescription of polypharmacy (Amisulpride, Benzodiazapines and Zyprexa).  The Zyprexa being prescribed over and above the manufacturer Elli Lillys maximum recommended safe dosage - and contrary to the wishes of Garth and his parent who holds Enduring Power of Attorney Medical and Guardianship.  Obviously, Dr. Hemlata Ranga is oblivous to the consequences of her blatant disregard of these legal documents. As was Dr.Gunvant Patel, Assistant Clinical Director who acted via proxy communicating the "treating teams" decisions to the parents, and; has now gone on leave, never having examined Garth while at Thomas Embling

Now its the Clinical Director, Dr. Maurice Magner... Perhaps Dr. Maurice Magner still considers that Mr. Daniels senior is too emotionaly charged to meet with him...  Instead he chose to speak to Garth who had yet again been forced to endure another 75 hours plus in seclusion... and released back into the Argyle Ward on Saturday afternoon 30 June 2012.   Garth is still being treated without informed consent...

What is the significance of Australia being signatory to the Declaration of Helsinki...the Nuremburg Codes...the U.N.Convention Against Torture...????   Is it possible that those psychiatrist treating Garth Daniels have forgotten that once they were doctors?  Is the Hippocratic Oath not ... FIRST, DO NO HARM?


Side Effects and Warnings


While benzodiazepines can improve the quality of sleep, these drugs are known to cause a number of side effects including stomach upset, blurred vision, headache, dizziness, impaired coordination, depression, trembling, nightmares, weakness, memory loss and clouded thinking.- If any of these effects persist or worsen, inform your doctor promptly.